Disaster On The Clearwater 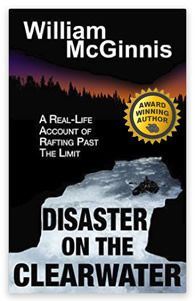 Count yourself lucky that you can read rather than live this tale of pushing the limits on the Clearwater River. A white-knuckle rafting adventure, this vivid true short narrative will immerse you in the wilds of British Columbia and likely flood you with joyous schadenfreude. Thank God that’s not me!

Born in Richmond, California, William McGinnis grew up hiking, rafting, and canoeing rivers throughout California and beyond.

After earning a Master’s degree in English literature, Bill wrote the first thorough guide to the art of river rafting. Published by the New York Times in 1975, Whitewater Rafting received strong reviews, went into multiple printings, and was long considered the bible of the sport.

Also in 1975, Bill founded Whitewater Voyages. Under Bill’s leadership, Whitewater Voyages set new standards in guide training and trip quality, and as a result grew to become California’s largest rafting company at that time, guiding more people on California rivers than any other outfitter.

While he has a number of first descents and pioneering raft runs in California and throughout the world to his credit, McGinnis is most proud of his influence on guiding. “People thrive on appreciation,” he says. “On the river—and pretty much everywhere—an atmosphere of acceptance and inclusion helps people move from fear to confidence to joy. Holistic, nurturing guiding inspires openness, trust and camaraderie.”

In 2011, McGinnis published the ebook Sailing the Greek Islands: Dancing with Cyclops, a true, sometimes hilarious narrative of his adventures skippering a catamaran on the Aegean Sea crisscrossing the wake of Ulysses.

McGinnis’ 2012 novel Whitewater: A Thriller interweaves a rough-and-tumble murder mystery, drug-cartel plot, lyrical nature writing, his holistic philosophy, and a breathtaking series of white-knuckle encounters in and out of the rapids of California’s Kern River.

The novel as received strong reviews, such as, Noel Robyn’s “WOW!! DOUBLE WOW!!!!! An amazing thriller! I couldn’t put it down …” and Peter Coyote’s “A great fun read, good-hearted, generous, and instructive…” And the Whitewater: A Thriller audiobook has been described by Becky Parker Geist as, “A gripping thriller with a soulful, uplifting undercurrent: a must-listen!”

Bill’s current project is a sequel to Whitewater: A Thriller to be called Gold Bay. A crime thriller, Gold Bay will encompass not only the natural wonder that is San Francisco Bay, but also the entire Bay Area—including Silicon Valley, San Francisco, Marin, Napa, and the East Bay—during an imagined near-future time of societal turmoil, cultural renaissance, and spiritual awakening.

In addition to writing, sailing, and rafting, McGinnis’ passions include hiking, biking, woodworking, tai chi chih, staring into space, and exploring new paths to adventure, friendship and growth. Bill lives beside a creek in El Sobrante, a town in Contra Costa County across the bay from San Francisco.

For more about William McGinnis and his books, visit WilliamMcGinnis.com