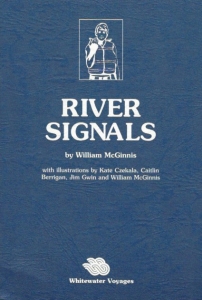 Published in 2001 by Whitewater Voyages, 31 pages.

On the river, where distance and the roar of the rapids can make it impossible for speech to be heard, hand and whistle signals can be useful in all sorts of situations, including coordinating groups of boats, enabling fast effective responses to life-threatening emergencies, and making those all-important emotional connections.

In the course of a lifetime of river running, I – and many of my boating companions over the years – have adopted the language of hand and whistle signals shown in this little book. Some of these signals were already universal; many are based on signing, the language of the death; and we’ve tried to make as many as possible intuitive that is understandable at first glance.

By facilitating clear communication in situations where it would otherwise be impossible, a widely use language of hand and whistle signals can enhance cooperation and goodwill within and between boating groups, and make and help make all of our river journeys safer, smoother, and more fun.

Ever find yourself frantically yelling across a roaring river, making panicked gestures about searching for a lost paddler, and it finally dawns on you that your buddy’s just trying to say he’s forgotten the beer cooler? While river signals and whistle blasts can bridge the communication gap, there have been as many different signals as there are reasons to use them. Thankfully, a paddler has stepped forward with a dictionary of river signals designed to topple this tower of Babel. River Signals, by Whitewater Voyages founder Bill McGinnis, was written to standardize signals, covering such situations as scouting drops, organizing a group, river etiquette, missing people and even blind swimmers. “If we’d had this book 30 years ago, we could have avoided some pretty hair situations,” says McGinnis. Based on current universal signals and many new ones inspired by signing, the language of the deaf, McGinnis’ signals are “designed to be intuitive, that is, understandable at first glance.”