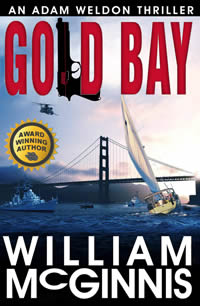 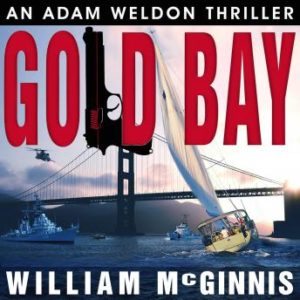 Ex-Navy SEAL Adam Weldon tracks down kidnappers who have the San Francisco Bay Area teetering on the brink of societal collapse.  In this white-knuckled ride—much of it via sailboat—through not only the Bay’s world-famous watery landscape but also its unique subcultures and quirky neighborhoods, Adam allies with a tech-savvy Oakland cop, child sicario hitmen, and undercover FBI agent Tripnee to battle an out-of-control Silicon Valley billionaire, a charismatic cult with dark secrets, Bay pirates, an apparently unstoppable cartel well on its way to achieving the total corruption and brutalization of the Bay Area, and—if that weren’t enough—moral rot extending into the highest reaches of the US government.

In the course of this gripping, life-and-death race against time, Adam comes to understand his extraordinary uncle—and himself—as never before.  Could his Uncle Peace, a cantankerous ex-Zen monk, be the key not only to saving the Bay Area—and America—but also to sparking a civilizing cultural and spiritual renaissance? 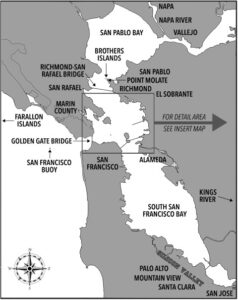 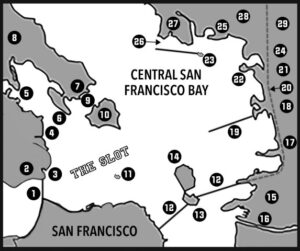 Adam’s uncle, Peace (an ex-Zen monk) has been kidnapped and Tripnee has also disappeared. Adam’s search, mainly undertaken on his 70ft high tech yacht Dream Voyager, leads him to uncover a network of corruption and intimidation so pervasive as to threaten the future survival of the way of life within the Bay community and the whole fabric of American society – all the way to the White House. Adam has unresolved issues from this childhood and needs to understand his uncle’s role as standing for a different set of values and life choices.

William McGinnis is a California native and I enormously enjoyed his portrayal of San Francisco Bay, particularly the central area where most of the action takes place. His characters tend to be very rich, very poor, very beautiful, very ruthless: both the action and the boats are relentlessly high-speed.

McGinnis is also an expert in whitewater rafting. This underpins a thrilling sequence on the bow-wave of a container ship heading out into the Pacific on its journey back to Asia. In general boats are a means of transport and intimidation – and high-speed chases – rather than central to the plot.

The story plays out in the waterside houses of the rich and within the preposterous antics of new age cults and dodgy philanthropists. I found it escapist, amusing and highly readable.

–“If you like the idea of being dropped into a high-velocity chase between the most nimble protagonist you could ever imagine and an all-but-invisible and nightmarishly efficient surveillance system—but with absolutely no risk to yourself—then Gold Bay is just waiting for you.”
– Scott Parkay, creative writing teacher

–“I really enjoyed Gold Bay. Well done! I’m amazed at what McGinnis has accomplished. It is truly ingenius how he folds all of the local places into the storyline, and ties it together with the last book.”
– Al Wallash, physicist, sailor, drone pilot, sour beer connoisseur

–“Gold Bay is stunning! What an imagination! I like the ending. I like that they get churned up in the ship. Serves them right!”
– Wendy Bartlett, author of Broad Reach, The Flood: Three Girls, a Cat and a Boat

–“A great thriller, set in the beautiful San Francisco Bay Area. The author takes you through a breakneck chase over land and water to track down crimes and take down the bad guys. The heroes and heroines restore your faith with their steadfast determination to do the right things. A fantastic journey.”
– Hao Tran, author of Skinny Lady in a Straw Hat: A Viet Nam Memoir

–“I really enjoyed the story. Adam and Tripnee do not disappoint, and are great characters. Peace and his message are a great addition to the team, and having his life of helpfulness and caring rewarded by so many people is beautifully written. … I really like that Adam sails his boat around the Bay, rather than just motoring. … I love and hate the Bay Way, as I think every boater on the Bay will, as we have all had the awful thought of what would happen if you were run down by a tanker. … Brings out the wonderful relationships that caring people form with one another, and that a lifetime of helping others can have great rewards.”
– Mark Kocina, Captain and Owner, Central Coast Charters