In Depth Interview with Lisa Haselton

In Depth Interview with Lisa Haselton

Posted on February 10, 2022  Originally on https://lisahaselton.com/2022/02/10/new-interview-with-thriller-author-william-mcginnis/ 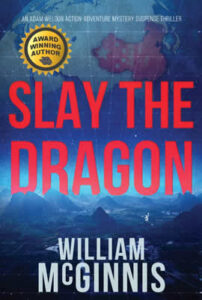 Today I have returning thriller author William McGinnis to chat about his newest action-adventure novel, Slay the Dragon: An Adam Weldon Thriller.

At Richmond’s Harry Ells High School, he presided over the chess club, served on the senior board, competed in impromptu and extemporaneous tournament public speaking with David Dansky’s Forensics Club, and wrote poetic, satiric and philosophic tidbits.

Making lemonade out of lemons: When he graduated with a BA and an MA in English literature from San Francisco State University, Bill applied to every junior college west of the Mississippi only to find that there were no teaching jobs to be found. This turned out to be one of the best things that’s ever happened to him.

Instead of teaching, Bill wrote Whitewater Rafting, which was published in 1975 in hardcover and softcover by Quadrangle: The New York Times Book Company. The first thorough guide to the art of river rafting, Whitewater Rafting was considered the bible of the sport for decades and was reprinted many times.

Also in 1975, with two rafts and a $500 gift from his grandmother, McGinnis founded Whitewater Voyages, which pioneered guided rafting trips on a number of California rivers, and grew to become California’s largest river outfitter. For many, many years he and his guides took more people down more California rivers than any other rafting company.

In recognition of his many contributions to the sport of rafting, in 2000, Bill was named one of the “Top 100 Paddlers of the Century” by Paddler Magazine, the leading national paddle-sport publication.

McGinnis published the original The Guide’s Guide in 1981 and the greatly expanded Guide’s Guide Augmented in 2006. To this day, this comprehensive work serves as a bible for professional river guides all over the world.

While he has a slew of first descents and pioneering raft runs in California and throughout the world to his credit, McGinnis says it is his influence on guiding that he is most proud of. The essence of good guiding, he says, is “…appreciating, nurturing people. Helping them move from fear to confidence to joy, from being a stranger in a group to bonding, from feeling cut-off from nature to feeling in love with and at one with this planet, and from being somewhat scattered inside and maybe self-critical to feeling more self-accepting, more whole, more energized, more alive.”

It’s been said that we gain experience—and eventually wisdom—by making mistakes. This certainly applies to Bill. At least the making mistakes part! One such near-death misadventure is described in his short but terrifying ebook, “Disaster on the Clearwater: Rafting Beyond the Limits.”

McGinnis’ other works include, “Sailing the Greek Islands: Dancing with Cyclops,” “The Class V Briefing,” and numerous magazine articles.

Welcome back to Reviews and Interviews, William.
Thanks so much! It’s great to be back. I’m super excited to tell your readers about my latest novel—which prompted one reviewer to declare:

Let’s get to it then! Please tell us about your newest release.
Here’s a quick teaser for Slay the Dragon: An Adam Weldon Thriller:

A police officer is brutally murdered in a “mostly peaceful” Oakland protest. City hall shuts down any serious investigation of the heinous crime. Ex-Navy SEAL Adam Weldon and his cop buddy BC take up the search for the killers only to find themselves hunted, outmatched, and at risk of being killed at any moment.

As they fight for their lives, Adam and BC discover the horrible truth: The murder is part of a relentless, 40-year, “unrestricted warfare” assault on America by an implacable, seemingly all powerful foe. A sovereign state with vast resources—including database files on virtually everyone and the ability to track—and kill—anyone, anywhere, at any time. A sovereign state determined to bring America to its knees and to become itself the dominant power in the world.

Can Adam and his team—and American democracy itself—survive? To find out, plunge headlong into this rousing, upbeat, rip-roaring Adam Weldon thriller by award-winning author William McGinnis.

My goal is to write novels that are richly entertaining and also inspirational, educational and uplifting. If I do say so myself, Slay the Dragon, my best writing so far, achieves this in spades!

In the course of an irresistible, swiftly unfolding story, the novel provides a vivid grand-tour travelogue of present-day San Francisco Bay and South-Central China (maps included)–and so much more.

Simply by plunging into this engaging narrative, the reader will gain insight into some of the most important, pressing issues of our time—many ripped from today’s headlines: The undermining of law and order across America. The impossible dilemmas and lack of support faced by police officers during recent violent street riots. The Chinese Communist Party’s drive for world domination. The plight of ordinary Chinese citizens, especially the Falun Gong–and the astonishing courage of its pro-democracy dissidents. The CCP’s forty-year, all-out, unrestricted warfare against America—all with the goal of bringing the US to its knees—all carried out with the complicity of bought-and-paid-for US elites. The totalitarian drift of American society. The battle to save American freedoms. And a whole lot more.

All this is woven into this gripping, wild, fun tale! Amazing!

What inspired you to write this book?
Above all, I wrote Slay the Dragon to entertain and delight my readers. Also, I hope the book, even as it grips and thrills, will serve as a national wake-up call and help save American democracy!

What’s the next writing project?
Two projects: An anthology of memories, true adventure stories, tall campfire tales, and nuggets of wisdom—written by my former river guides and myself– reflecting the adventure-friendship-growth philosophy of my former river rafting company Whitewater Voyages. Also, a fifth Adam Weldon Thriller is in the very, very early stages!

#1. Baby Steps: When the writing isn’t moving, it’s usually because I’m trying to take steps that are too big. The key is to break it down into smaller and smaller—and more and more doable–steps. Instead of trying to write the perfect sentence, just write any halfway decent sentence. Or if that doesn’t get things moving, just write any sentence—any sentence at all. Or a fragment of a sentence. Or a phrase—or a single word. Instead of trying to come up with the perfect word, just think of any word. Sometimes the only step I can manage is to just get my rear into my writing chair. Or to take the tiny step of simply trying to think a thought, any thought, about the writing project at hand. Still stuck? See #2.

#2. For the Time Being, Say A Radical Yes to Everything, Then Let Everything Except the Writing Project Go. Remember/realize that, being human, you have the option within yourself to say, “Yes, OK, so what,” to everything and anything. Worries, regrets, doubts, fears. Thoughts and emotions of every size, shape and intensity. You have the ability to simply say, “OK, I see/hear/feel you. You exist. That’s OK. You’re in me, with me.”  Then, after this acknowledgement, temporarily set aside whatever’s bothering you.

One of my challenges is that I forget that all these things within me are not really ME. Not my essence. In fact, they’re not even all that real. On some level, they are figments of me trying to help or protect me. But often they tie me in knots.

A wonderful miracle of being human is that we have the gift of awareness, if we choose to exercise it. We can ask ourselves: what’s bugging me right now, what’s stopping me from doing what I want to do?

Amazingly, miraculously, looking at, and consciously acknowledging whatever it is that’s bugging us can then give us the ability to (at least temporarily) set it aside.  This in turn can free us–and free our vast inner creative wellsprings–to focus on whatever we choose.

If your novels require research – please talk about the process. Do you do the research first and then write, while you’re writing, after the novel is complete and you need to fill in the gaps?
I seem to write and live largely by the seat of my pants. In writing Slay the Dragon, I pretty much plunged in and was able to draw upon my intimate knowledge of the San Francisco Bay Area and on my personal off-grid travels in and extensive reading about China. As the need arose in the course of the writing, I took frequent breaks to research particular subjects—including, for example, the details and nuances surrounding aspects of Chinese culture such as guanxi (bribery with Chinese characteristics) and mei ban fa (nothing can be done/we’re helpless to affect the situation), and the use of words like gweilo (foreign devil/derogatory term for foreigner) and baizuo (Western leftist ideologies which discriminate against Asians).

What’s your writing space like? Do you have a particular spot to write where the muse is more active? Please tell us about it.
I’m still doing most of my writing in my big, comfortable chair with a desk that swings into place in front of me. The desk has my laptop and is covered with notes, books, pens, reading glasses, and thermoses of hot tea and cold beverages. For when I’m on a roll and can’t get up, I have some nuts and dried fruit within reach.

By chance, on the QT, I described my writing space in chapter 4 of Gold Bay, the second book in the Adam Weldon series:

After Peace was kidnapped, Adam enters his uncle Peace’s house in El Sobrante in the San Francisco Bay Area:

“… The house was the same as always. The rooms overflowed with sturdy furniture that the two of them had made together. Peace’s love for flat table space–for writing, trip packing, projects–was much in evidence. Comfortable chairs in conversational groupings recalled times of warm camaraderie.

Plopping down in Peace’s favorite chair, Adam found his eyes growing moist. Within reach were his uncle’s familiar array of pens and writing tablets, switches for the forest of nearby reading lights, piles of books, and quantities of Dollar Store reading glasses. He felt the deep pleasure of home, but also another feeling. What? A lingering exasperation with the old coot?”

What authors do you enjoy reading within or outside of your genre?
Writers in my genre: I enjoy Jack Reacher novels by Lee and Andrew Child, Mitch Rapp novels by Vince Flynn and Kyle mills, Mark Greaney’s Grey Man series, and anything by Elmore Leonard. Other favorites: Paula Hawkins, Ken Follett, Michael Connelly, Elizabeth George, Janet Evanovich, Tim Maleeny, John Lescroart, and Shelley Adina. Outside my genre, I’m currently engrossed in “The Real Anthony Fauci” by Robert F. Kennedy Jr.—a must read for every human still alive on planet earth!!!!

Anything additional you want to share with the readers today?
Thanks for the opportunity and great questions. It was a pleasure. The very act of sharing/thinking/writing about Slay the Dragon prompted me to see it in new ways!

I invite you to read our earlier interview about my novel Cyclops Conspiracy: An Adam Weldon Thriller, too!

Thank you for coming back to Reviews and Interviews!

By admin|February 17th, 2022|Categories: Interviews|Comments Off on In Depth Interview with Lisa Haselton